Canine performance science has been a strong interest of mine for over 30 years.  It began when I was researching ways to minimize racing injuries in racing Greyhounds back in 1989.  The paw to surface interaction was a crucial component in this effort.  This research ultimately led to the realization that, in any athletic or working dog, the pursuit of optimum performance includes minimizing injuries and activity-related illness.  The end result is a successful long healthy performance or working career.

The paw is where most all of the dog-surface interactions occur.  When walking or running, the impact forces are absorbed by the muscles, tendons and bones of the leg as a whole but the paw and toes receive the initial contact. There is a great amount of research related to this in humans and horses.  A search on Google Scholar using the term Foot, Impact and Human resulted in 45,500 articles and a search using Hoof, Impact and Horse resulted in 2350 articles published in this topic since January of 2020.  Many articles discuss dog paw impact using force plate data, pressure sensing walkways/mats or using pressure sensors, but a high-speed video of the paw to surface impact has been severely lacking.

Unfortunately I have been unable to capture an important piece if the puzzle, a high-speed video of paw impact.  Last year I had the opportunity to purchase an Olympus I-Speed camera which had the capability of capturing up to 1000 frames per second at a resolution of 800 x 600 (I want to thank my wife, Diana, for supporting this purchase).  Also, capturing video at this rate needs a lot of bright lighting.  Recently we had access to a location which would provide an environment that had all of the necessary space and instrumentation to make this happen.  So I was excited when we were able to set up a time where we could finally capture the structural actions of paw impact.  A big thanks go to Jeannie Willems, Rebekah Strunk and Jeannie’s dog Guster.  I am hoping this video is helpful to those who have an interest in paw impact of the dog.

We captured three different views of a dog walking on a Pressure Sensing Walkway that was laid on a hard rubber surface flooring.  The first view is from the right side looking downward and rearward, The second view is from the side and the third is from the front.

“At the end of the stance phase, as the toes are coming off, the digital flexor muscles are strained because they are contracting while being stretched at the same time. This creates an eccentric contraction and is occurring at the end of every stance phase.

“The sensory nerves and the nerves stimulating the digital muscles are the radial, median and ulnar nerves.  The mean conduction velocity of these nerves is 60 meters per second or 6o millimeters per 1/1000 second.1  So many of the actions and reactions that occur during the stance phase seen in this video are happening faster than the nerves can react.

“This suggests that neuromuscular memory is playing role as well as structural limitations. This is why exercise and proper conditioning is so important in working and performance dogs.  Reconditioning and retraining should also be included when developing a rehabilitation regimen.

“The dog moves the front limb towards the center of the body to maintain its balance.  This results in the lateral aspect of the paw to first make contact with the surface.  Then the rest of the paw comes in into contact, creating an inward rotation, or pronation, of the paw.  As mentioned earlier, this results in compressive forces on the medial aspect and distractive forces on the lateral aspect of the distal limb.  The toes, metacarpals and carpus are held in position as a result of the balanced activity of the digital flexor and extensor muscles, the interosseus muscles, the bony structures and the ligaments holding the joints together.

“Although the paw is held in place by the forces of gravity and friction of the surface, the musculoskeletal system is still actively working to stabilize the limb while balancing the body for the duration of the stance phase.  The skin hides all of the activity that is occurring in the actions of locomotion.  During this time, the muscles, tendons, bones and ligaments of the joints in the distal limb are providing both postural and locomotory efforts to maintain the structural stability, balance the body and provide the actions needed for locomotion.”

To understand the ground reaction forces involved in locomotion it is best to describe it as a resultant of three orthogonal components.  The directions of these components are vertical (z), backward-forward (y), and side-to-side (x).  The z  and y  forces play the biggest role in the straight-a-way, and the x  force becomes a factor in the turn. 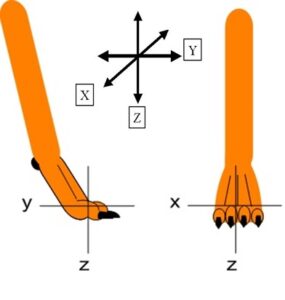 Paw (Foot) Strike and Actions on the Body

Initially impact forces are produced when the paw collides with the surface.  Then, traction is needed between the foot and the surface so that the foot can grip the surface.  The “Z” force is downward into the surface and is related to gravity. The “Y” force is the fore and aft forces. The “X” force is the medial to lateral forces.  The forces occur in three planes but over time this also creates rotational or torsional forces on each of the structures in the paw.  The forces of impact will create distractive forces on the caudal and lateral side of the limb and compressive forces on the cranial and medial side of the limb.

The act of locomotion involves the dog’s movements that propel the body forward or whatever direction the dog is moving.  These motions and activities are dependent upon and affected by the paw-surface interaction.  Each digital structure will bear varying forces dependent upon the phase of the stance.   The paw is made up of four digits and the metapodal region.  This allows for the impact forces to spread out and be absorbed by individual components.

The paw pads play an important role in structural protection and surface traction. The dog’s body can interact with many types of surfaces.  Most of the dog’s skin is not designed for the collisions of surface interaction.  When a dog falls down and scrapes its shoulder on the sidewalk, it can create abrasive injuries to the skin.  The dog can also get hit by an object (like another dog or a car) on a part of the body which can cut the skin, create contusions or damage subcutaneous tissue resulting in bruising.  The dog’s paw pads are continually interacting or impacting with the surface.  The pads are designed in a way that prevents the issues described above.

The positional weight of the body affects how the forces of impact affect the distal limb.  There are compressive forces on the medial and cranial aspects of the limb while there are distractive forces on the lateral and caudal aspects of the limb.  As the body moves through the stance phase these force applications to the musculoskeletal system, are transitioning which results in rotational or torsional forces being applied over time to the distal limb.

The paw to surface interaction must provide traction and stability during the contact time.  The proper surface will allow for controlled running and locomotion.  The foot needs the proper amount of traction for controlled activity.  The dog can control and steer his activity or running only while the feet are in contact with the ground.  A dog’s actions or performance are greatly reduced anytime that poor footing occurs.  Inadequate traction, or loose footing, alters the muscular activity of the dog as it tries to maintain its balance.   These adjustments, made while the dog is moving, can lead to muscle strains and ligament sprains.

The first part of the stance begins when the paw touches the surface.  The forces borne by the paw will then increase.  Typically two-thirds of the forces applied to the front paws are described as braking forces and one-third propulsive.  The rear limb is opposite of that, where one-third is braking and two-thirds are propulsive.